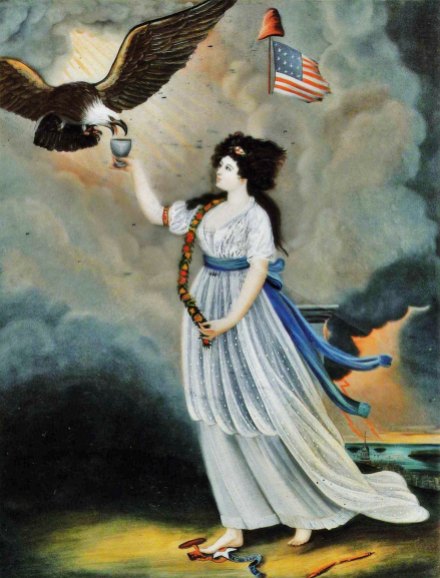 The E-Z way to get men to fight for you is to convince them that their women are threatened by some bad men “over there,” and that only their swift sacrifice will protect the purity and freedom of their charges.

You see this propaganda technique used frequently in warfare of all intensity levels. In general, men don’t care all that much about threats to other men who aren’t explicitly bonded to them in some way. A man might put himself at risk for his buddy or brother, but he’s quite unlikely to feel that much urgency to protect a more distant male relation.

The woman threatened doesn’t even have to be real. In the case of the low-level rhetorical conflict of #GamerGate, one side invented a cartoon woman to act as an organizing symbol of their ‘movement.’ Both sides tend to be men fighting for the perceived honor of their women, whether or not those women are real or not. Additionally, questions of real versus virtual identity often pop up, particularly in the case of the veracity and real danger represented by ‘death threats.’

In the real world, women are rarely threatened by lethal violence, and never have been at nearly the same rates as men have been. This has been marginally different with the brief and disappearance of the doctrine of total war during World War II, but norms in warfare have returned to within historic ranges since then.

The trouble that feminists have is that, by positioning themselves as equal to men, they run the risk of making themselves less attractive as objects of inherent male chivalry. In the case of the #GamerGate kerfuffle, a feminist academic who has crowd-funded her career by decrying the masculine tendency towards chivalry has simultaneously found herself appealing to male chivalry to defend her from the real or imagined threats to her safety.

The recent UN campaign calling for men to defend women in their global quest for equality splays out this contradiction even further. If women are indeed equal to men (which they aren’t, owing to sexual dimorphism in our species), then they should need no men to defend them. They should be like the Amazons of myth. Because the Amazons are myths with no basis in reality, people who try to make the more fanciful myths real will find themselves often frustrated.

This sort of unstable situation, in which women provoke male conflicts in order to gain attention, is not sustainable. It’s one of the reasons why successful societies have tended to separate women from military concerns.

The gender as a whole as a skin in the game problem in that, like Helen of Troy, whatever happens to their home culture, they’ll be taken care of, whether by their fathers, brothers, and husbands or by their new masters. Menelaus just re-po’d his stolen wife after the sack of Troy, and Paris dies in agony (along with countless other heroes on both sides).

When men lose conflicts, they all get killed, or they lose everything but their lives. If women are on the losing side, they might even rise in social status.

On the international scale in America, we have women represented in our military, diplomatic, and espionage institutions at higher rates than they ever have been before. Women charged with the defense of the country tend to make headlines holding up self-portraiture signs, sometimes provoking major international conflicts like in Ukraine. Characters like Victoria Nuland and Hillary Clinton provoke wars that they will never be endangered by.

This is already a major problem in democracy (horrible tragedies like the slaughter at Galipoli occurred due to the reckless ignorance of Churchill), but it’s compounded further by the presence of women in military authority.

The popularity of virtual death threats as a last-ditch appeal to chivalry shows that, underneath the egalitarian rhetoric, even the most radical feminists of today enjoy the feminine power trip of seeing countless men pledge their virtual honor to her defense.

The correct way for men of good character to respond to this is not to decry the male impulse towards chivalry: it’s to ask for the pound of flesh that men tend to be owed for their sacrifices before lifting any fingers for any purported damsels in distress. Knights in medieval tournaments at least expected a flower signifying a favor. Have some self-respect.